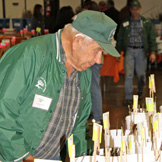 Nick Botner and his wife Carla lived in Yoncalla, Oregon where Nick indulged his passion for collecting different fruit tree varieties. For over 40 years, Nick pursued his passion of fruit collecting, and his hobby resulted in over 4,500 different apple varieties, many heirloom and rare cultivars. In addition to the apples, he had a large number of cherries, plums, pears and grapes.

At the age of 84, Nick gave TOC permission to clone his collection and welcomed the opportunity to have it preserved for the future. So in January 2011, we began collecting scions and grafting trees. Since then, each winter we have collected more scions and each spring we have grafted, and grafted and grafted. So far, approximately 5,000 trees have survived and been planted in both the Marion Dunlap Block (the nursery) and in the Nick Botner Block (17-acre plot) at Almaty Farm. Every summer and fall, another 1,000+ baby trees are in one–gallon pots, under shade cloth, getting lots of TLC.

We lost Nick on February 13, 2020. He was 93. We are grateful beyond measure for Nick’s foresight in 2011. The potential loss of his collection was the imputus for creating TOC.

Many of us share Nick’s enthusiasm for collecting fruit tree varieties. At Almaty Farm, we are turning our passion into a permanent conservancy of tree fruits, for their genetic testing and research, and, most importantly, for their preservation.

Using the cloned Botner collection as a beginning, Temperate Orchard Conservancy continues to collect fruit tree specimens that grow in the temperate climate zones of the United States and in other temperate areas of the world. 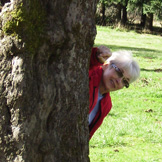 We continually work on the inventory, recording name of variety, date grafted, rootstock used and the location of the source material. We plan on using a scanning mechanism and type of barcode system to identify each tree in the orchard, making available all the data entered for each tree. In the meantime, a simple excel spreadsheet is doing the trick. You can look through a sub-set of the total inventory of our list of trees by downloading the file, TOC Scion List 12-2021 on the Contact Us/Order Scion Page. This list contains the trees available for scion requests.

Shaun and Joanie have been collaborating with Dave Benscoter to identify lost apple varieties in Washington. This KHQ news segment reports on Dave’s passion for finding rare/lost apples. The TOC founders are the “Testing Facility” mentioned. TOC will be getting these “lost” scions this winter to graft for the TOC collection in the spring. They will be growing at Almaty.